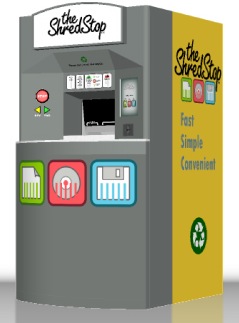 In these days of increased risk of identity theft, people are looking for ways to manage their sensitive materials. Get a shredding machine? Maybe. But typically, people would rather things be easier, in the stream of their other activities. So it often doesn’t happen, things piling up, or getting thrown away with some trepidation, or perhaps incinerated.

The Shred Stop seems to have hit on an idea that both integrates with the rest of people’s lives and does a better job then a personal size shredder could do, with a higher degree of environmental sensitivity.

It’s simple: locate them in grocery stores and other places that already have coin counting machines, charge $2/minute for shredding, able to do it much faster than your usual home/small biz shredder, and you’re able to quickly get done what would either not get done, where you’re already going anyway, or would otherwise take much more of your valuable time.

As they put it, “Shredding a file-box of material should take about 6 minutes (in one of their machines) and cost about $12. Shredding that much at home would take at least two hours. Yes, your free time is worth more than $6 per hour.”

Going beyond what you as an individual or a small company might do or be able to, they recycle the paper that goes through it, with the only action on the user’s part being to make sure to insert paper and plastic separately, so as to not render paper recycling unusable.

You might say, why couldn’t I myself recycle it?

As Shred Stop’s Stephen Hershman said to me:

“…most waste companies that provide regular residential and commercial service won’t take shredded paper for recycling.  Their sort lines aren’t set up to deal with it and the shredded paper clogs their machines.  We are using dedicated waste bins so our recycling company can bale the material with other mixed paper for sale.”

What can it shred? Everything from large envelopes to cds, credit cards, floppy disks, receipts, full envelopes, cardboard, staples, paperclips, and humorously, they include report cards in there.

Speaking of, their site cleverly exposes you to a range of ideas of things to shred, and rather then just tediously listing them, they simply shift one word on their tagline, “Shred your ____, not your nerves” in a moving display on the front page.

They currently have one location in Edmonds, Washington which they’re wisely using to test the model first, and once confident, plan to expand to a number of other locations. You’re welcome to request a Shred Stop in your area, here.