Reading Between the Lines on Obama’s Inauguration Speech: What Does It Mean for the Green Economy?

George W. Bush sat just a few feet behind Barack Obama during the new President’s Inauguration address, delivered on a frigid yet sunny Washington, D.C. day.  The former President appeared warmly dressed but must have felt a distinct chill in the stern repudiation he was publicly receiving, however eloquently Mr. Obama delivered it.  CNN’s camera showed Bush, wearing his best poker face, flinch ever so slightly when Mr. Obama suggested, “We will restore science to its rightful place.” 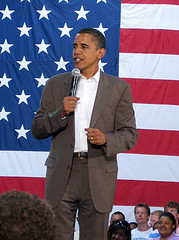 It was not difficult to rebut the former President and his policies.  Indeed, many might attribute the Democrats’ sweeping victories last November to Bush’s final approval rating, which was worse than any outgoing President in history (22%, CBS/NYT Poll).  Obama chastised the former President’s policies, in no uncertain terms, on the Economy (“Homes have been lost; jobs shed; businesses shuttered”), Civil Liberties (“we [Americans] reject as false the choice between our safety and our ideals”), Education (“our schools fail too many”), Foreign Policy (“each day brings further evidence that the way we use energy strengthen our adversaries…”), and the Environment (“…and threaten our planet.”).  He criticized Bush’s leadership (“a sapping of confidence across our land”), and his claim during the 2000 campaign to be a “uniter, not a divider” (“we come to proclaim an end to the petty grievances and false promises, the recriminations and worn out dogmas, that for far too long have strangled our politics”).

But what about looking forward?  Obama asked that when future generations look back,they would be able to say of us, “that we did not turn back nor did we falter; and with eyes fixed on the horizon…we carried forth that great gift of freedom and delivered it safely to future generations.”  And while he acknowledged that the “we can no longer consume the world’s resources without regard to effect”, and that we would “harness the sun, winds, and soils to fuel our cars and run our factories”, he made no specific promises or allusions to how he would juggle the desire to green America’s economy and free us from foreign oil with the more than $10 Trillion deficit and sputtering economy he is inheriting.

Obama has laid out a firm plan for a stimulus.  Unveiled in congress five days before Mr. Obama took his oath, the stimulus package contains money for quite a few green initiatives:  $32B to update the country’s electrical grid, increasing energy efficiency with ‘smart grid’ technologies, $20B in tax incentives for alternative fuels, $10B for mass transit and rail construction (although there is $30B for highway construction), and several billion for updating public buildings to become more energy efficient.  The total stimulus bill?  Currently it stands at $850B over two years.

The stimulus money has two main goals, according to House Speaker Nancy Pelosi:  “Immediate job creation and continuing job creation.”  The green portion of this stimulus package will help create some of the green collar economy that we keep hearing about.

But perhaps the more important shift from the era of Bush to the era of Obama is the ongoing policy that we can expect.  Obama has talked openly about the green collar economy, and has been linked with FDR for some of his ideologies that rival New Deal politics, with a ‘green’ twist.  While Obama slipped with many environmentalists by openly talking about “clean coal”, his rhetoric and sentiment alone show that he understands the connections between foreign policy, the environment, the economy and our health.  And rather than dealing with them individually, applying bandages to open wounds, as many would argue the Bush Administration did, Obama has openly acknowledged the need to attack these problems at their root.  Perhaps it is his history as a community organizer, where he was able to get to know ‘the common man’, or maybe it was his upbringing as the son of a mixed race couple, but regardless, he gets it.  He gets that ‘a nation cannot prosper when it favors only the prosperous.’  I believe that rising tide will raise all ships that we on the political left feel will make the world a better place:  green jobs, freedom from foreign oil, a fair system of taxation that does not favor the wealthy, smart growth, and personal responsibility to make the tough choices ahead.  While Bush’s head was firmly in the sand in blissful ignorance on topics of great importance, Mr. Obama signaled with his first speech as President that his eyes are wide open, and that he is ready to lead us forward.