Starbucks Shmarbucks – 2009, the Year of Coffee on the Cheap

Last updated on by Felix Desroches 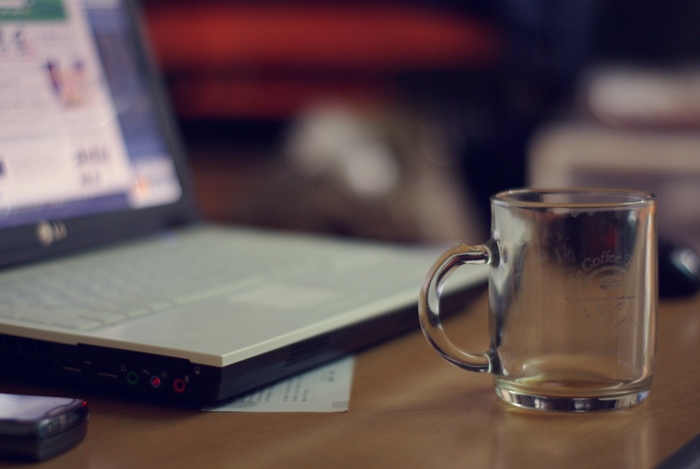 From subqns at Flickr under a Creative Commons License

As the mercury drops this winter season, the Grande Latte is in vogue again – but will set you back almost $4.  Here are 5 tips for how to have your cup o’ Joe without breaking the bank.[social_buttons]

While I sat sipping my Grande Latte on a cold December day, I was taken aback by how much lighter my wallet felt as a result.  In between sips I managed to calculate that at the rate of 20 sips per cup, each sip  was costing me $0.20!  The realization that I could just as easily down a gallon of crude oil instead and still have some left over for a biscotti, made me vow to do whatever it took to ween myself from my addiction – here’s my story:

1. Bring your own mug

At first I went easy, and brought my own travel mug to the store.  At Starbucks this will save you a paltry $0.10 a visit, but I figured it was better than nothing.  Besides, I found my spiffy Starbucks Mug made me feel ultra cool since I was saving trees by not using paper cups.  I also discovered that I wasn’t re-heating my coffee in the microwave, an extra boon in my book.

I next decided that I should forgo the “latte” part of my daily addiction.  When I thought about it, I couldn’t remember ever needing so much milk in my coffee before the onslaught of Starbucks, Peets and the like, and switched back to the hard stuff.  It took awhile to adjust to the taste, but my wallet immediately felt the difference: at an average of $1.50 a cup, I could go more than twice the distance for as much money as before (with increased jitters, however, since brewed coffee has up to 4 times more caffeine in it than espresso-based drinks).

Once I had conditioned my palate to accept filtered coffee, I took a different tack and decided to make my coffee at work.  This turned out to be easier than I thought since my office has a “community coffee” bin that we can all pilfer from.  It took me awhile to get the French press working just right, but after a few tries, some great coffee from my favorite sustainable roaster crew, Barefoot Coffee, and a nice mug, I was all set.

As much as I started loving my self-brewed work concoctions, I still found that my morning walk took me past too many coffee shops, often leading me to give in to temptation (especially with the slew of holiday drink specials available).  I then made a conscious decision to take a different route to work, bypassing all known coffee joints, and now have three or four paths that keep me far from temptation.  As an added bonus, I now see much more of my neighborhood than I ever did before, all with nary a sip.

In the final phase of my battle against coffee, I am attempting to switch to what some say is a healthier alternative: tea.  While I find the taste of tea to be weaker than coffee on the whole, there is much to be said about the astounding range of tea flavors available – one for every season, and then some.  I am especially taken with Lipton (ever since they started sourcing only sustainable tea leaves), and Numi’s organic teas, both of which I can brew both at home and at work – multiple times with the same bag (or infuser), saving even more money as a result.

This is my journey thus far from a latte-centric, expensive world to a slightly healthier, cheaper and more sustainable (albeit more watery) one, and it wasn’t nearly as hard as I had feared.

Any thoughts?  Suggestions?  Your own anti-latte journey?