What The Recent Renewable Energy Legislation Means For Consumers and Entrepreneurs

Last updated on by Maryanne Conlin 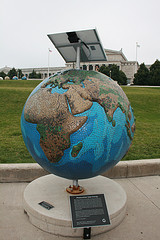 The following is guest post submitted to me by the ecopreneurs over at Grow and Make – The Sustainable Living Store.

Last Friday congress passed the renewable-energy Incentive Tax Credit, as an attachment to the $700b financial bail-out. This legislation provides an extension of the existing renewable tax credits, but also includes provisions for new tax incentives as well as bonds and the relaxation of regulations for industry and changes for major utilities.

As an entrepreneur and consumer, I was very curious to learn more about the implications and constraints of this legislation.

Aside from the research I did on my own, I discussed the meaning of this legislation with a few good sources of information, one being Bill Gross at IdeaLab, who has investments in renewable energy. Another excellent source of information was Solar Oregon, a non-profit based in Portland providing consumer information and resources on solar energy. I ultimately ended up talking to the Department of Energy and the IRS to nail down specifics.

What became clear from my inquiries and research is the following:

First, the new legislation applies in 2009, although it extends existing 2005 legislation for renewable energy.

Secondly, there has been a removal of the $2000 tax-credit cap which previously limited the amount that was eligible for a tax-payer refund on their investment. Additionally, you can offset AMT taxes with the credit if you have outstanding AMT taxes due. Residential homeowners can recover 30% of their investment costs and a business can recover 50%.

For consumers investing in solar installations this eliminates the doubts about having an adequate number of years to recover the tax credit on your investment. For installation contractors and suppliers of solar products, this reinforces the value of their investments in having solar as a core offering of their business.

The legislation eliminates the prohibition for utilities to benefit from the credit, and allows utilities to invest in solar projects and realize the tax benefits from their investments.

The legislation also provides $800 million in clean energy bonds which will be created for renewable energy generating facilities across the U.S.

Entrepreneurs will clearly benefit from the incentives and extended time-period by having market opportunities which they can capitalize on and a clearer picture of their investment horizon.

Not only will consumers and entrepreneurs benefit from this legislation, but our environment will see a significant carbon offset from the switch to renewable energy. Research indicates that more than 28 gigawatts of electricity will be produced from solar energy by 2016, enough to provide power to over 7 million homes.

We at growandmake.com had many questions which were not answered by reading the legislation and researching what we could online. We wanted to know what constraints existed for a renewable energy installation, specifically: do the tax credits apply only to grid-tied residential applications, what were the minimum power generated requirements, if any, was a certified contractor required, and what did the term ‘provides electricity to the home’ mean?

Oregon is very liberal in requirements for tax credits for solar installations, whereas Washington state has many eligibility requirements for tax credit eligibility. According to the DOE and IRS some of the Federal guidelines for 2009 are a work in progress and additional details are still be worked out by DOE, IRS and Legislative groups. These groups will be issuing notices on their respective websites to notify consumers and business owners once a final interpretation of the corresponding rules and policy definitions has been made.

Despite the fact that some ambiguity exists, enough of the new legislation has been clearly defined so that consumers and businesses should be excited about the outcome. Many consumers will be able to invest in renewable energy and recover their investment in a much more reasonable time-frame. Businesses can now include solar, wind and geo-thermal as a part of their eight year business roadmap with confidence.

You Can Visit the author’s site at: Growandmake.com

Energy Efficiency Legislation May Get Second Wind In Wake of Election