A Practical Approach to Selling CFL in Developing Countries 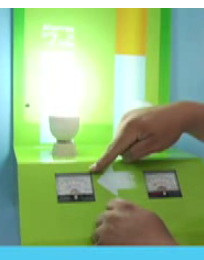 How do you sell $2 CFL lightbulbs in Nicaragua, a country where the average monthly income is $60-$100? If you’re Llamadas Heladas, you do it by directly demonstrating the savings, and appealing to  their desire for reliable power. Let me back up. Nicaragua, especially in the rural areas, is a place that largely depends on generators for power. And it often goes out, due to various reasons, including too much power usage. People are quite price conscious there.

Putting those two together, Llamadas Heladas, a  company that offers among other things a phone booth on wheels, partnered up with TecnoSol, a local renewable energy company, to promote the use of CFLs during Earth Month. Yes month, they don’t mess around  down there. The joint campaign was called No Apagones. Basically, it’s reframing these lights to be a source of less blackouts, due to reduced energy use. They may cost four times a regular lightbulb, but they last 10 times as long, and use less energy, saving you both money and the headaches of power outages. A simple, compelling argument. Watch the video on their site. No Espanol needed, the message is clear.

$7 savings a year may not sound like much to those of us in the North, where there needs to be a greater emphasis on the macro, ecological benefits to convince people here. But there, that $7 is a much greater proportional financial impact. Multiply that times the number of lights they use, and it stands be a substantial amount.

In a move that we could learn from, they have a display that leaves no doubt as to the difference between CFL and regular incandescent lights: A side by side comparison, with power meters showing the amount used. A clear, irrefutable demonstration.

To further encourage purchases, the No Apagones site had a competition between counties, to see who bought the most light bulbs. Competition is often a great way to  encourage greater activity, and in this case, it seems to have worked. Their initial effort resulted in 1700 lights being purchased. Future plans for No Apagones are to partner with larger corporations, perhaps having them give CFLs to each employee.

Stay tuned for a future article on TecnoSol, which provides solar systems for $1000, and is apparently doing phenomenal business in a part of the world that most businesses would see as having too little income, and no interest in things such as renewable energy.

If you as a company shift your lens from one focused on people thinking primarily in terms of environmental benefits, or that you think people will hold on to the perception that it costs a lot, there’s a lot of room to appeal to people in these countries on a much more basic, practical level.

Readers: Where else do you see innovative and/or effective ways to sell renewable energy to the broader public?

A Powerful Way to Help Your Fellow Entrepreneur on the Other Side of the Planet: Ecopreneurist