By now you’ve likely heard of microfinance, and the idea behind it — lending a small amount of money to support a person in the developing world create or enhance a business, and they pay back the money on very palatable terms. A small amount goes a long way, coupled with the ingenuity born of necessity. Sound familiar, entrepreneurs? It sounds like a fine idea, but you haven’t gone there yet. What’s stopping you? Perhaps it still somehow sounds like charity.

Do yourself a favor, and go watch the introductory video on the new KivaB4B site, which makes the most clear, compelling connection between entrepreneurs like yourself, and people in the countries that microfinance serves. It shows, side by side, the similar needs and activities we all have as entrepreneurs — a little boost, a bit of advice, and a lot of encouragement and community. 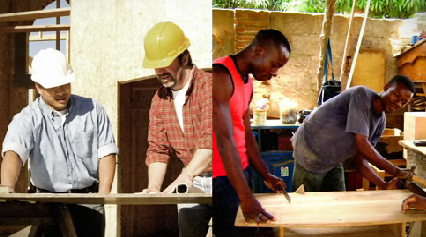 In a powerful synergy, Kiva, one of the top players in this realm, has partnered with Advanta, a credit issuer that is highly supportive of small businesses, to create KivaB4B. It’s simple really: You as a business owner put money towards someone via Kiva, and Advanta matches it, dollar for dollar, up to $200 a month. This may sound small, but think about it this way: If only 1% of Advanta’s 1.3 million customers put even $50 towards this, that would mean $1.3 million going to these people. Dollars that go a lot farther then they do here, making for a potentially significant positive impact for people just like yourself, really.

You were once (or perhaps you still are) getting started in business, and for many of you, there was some break, some nudge, some sign that you were going to go further than just an idea, just another company failing after a year. KivaB4B now provides you with a simple, no maintenance way to do the same, for the person of your choice, at as little or as much money as you care to put towards this. Not all corporate social responsibility efforts need to be grandiose. Sometimes it’s the smallest of gestures that can have the greatest of impact. And satisfaction.

To see specific examples of who’s giving and who’s receiving, go the the KivaB4B website, and click the Who’s Giving link. You may just recognize yourself in these people. To learn more about KivaB4B, and other happenings in the world of microfinance (or to write about it yourself!) KivaB4B has a community blog here.

Idea Blob: An Infectious Way To Fund Your Green Business