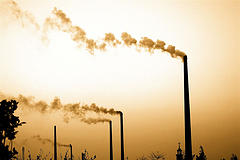 The European Union’s heavy industry carbon dioxide emissions during 2007 reached around 1.914 billion metric tons according to data released Wednesday. The numbers were 93% complete, because some of the 10,500 companies registered on the Europe’s carbon trading platform had failed to meet the March 31 submission deadline. Prices on the secondary carbon market rallied on the news Wednesday. The price of benchmark European Union Allowances (EUAs) futures increased 88 cents, a 3.9% rise.

The numbers are important for traders on the European Climate Exchange, who take guidance from the level of actual carbon emissions to gauge what demand for offsets is likely to be.

The data indicate there’s been a 1.1% rise in CO2 emissions according to Oslo-based Point Carbon. The release of the data marks the start of the second phase of the European Trading Scheme, a market-based cap-and-trade system which has been going for three years already.

ETS members can buy and sell EU Allowances (EUAs), permits to emit carbon dioxide. During the first phase of the program the carbon offsets price collapsed in mid 2006 and it has yet to recover. The current “spot” or immediate market prices one ton of CO2 at little more than zero cents, but market participants expect the situation to improve as the market is re-launched as the second phase (2008-2012) of the ETS begins in the next few months.

The EUA price collapsed because emissions data suggested there was a vast oversupply of permits. The ETS also drew heavy criticism because EU’s caps had been set way too high, leading to emissions increases.

Carbon prices are set to improve over the next months as the October 2007 10% cut in emission allowances goes into effect. The cut was decided on by the European Commission, which aims to make clean technologies an attractive investment. Analysts say the price of one tonne of carbon should rise to around €23 to €35 between 2008-2012. This report by Deutsche Bank is especially bullish. Factors that are expected to influence the carbon price are supply and demand, as well as economic growth in the EU.

Criticism voiced by environmentalists is that emissions haven’t dropped to levels that would suggest the scheme actually helps the EU to reach Kyoto Protocol levels. The EU’s Kyoto mandate is to reduce CO2 emissions 8% by 2012. Greenpeace asserted that the data implied the scheme was failing. “From the numbers, it looks like emissions are going up and that proves that the ETS does not work, it means we are not protecting the climate,” a Greenpeace spokeswoman told Reuters.

The environmentalists contradict the market participants who are sure that carbon trading will ultimately be incremental in helping the EU reach its goal of slashing emissions.

Point Carbon said that the 2007 data released showed that only a few countries exceeded their national emissions allocations. Industries involved on the ETS include power generators, iron, steel, glass cement and aluminum, who if they fail to reduce CO2 levels are mandated to buy permits to emit carbon on the open market. Plans are to include the aviation sector in 2011. The industries which caused excessive CO2 emissions were power generators in the UK, Italy and Spain.