Last updated on by Leah Edwards

Although Portland-based Sameunderneath is a sustainable clothing line, the Company has a broader social-enterprise mission beyond a concern for the environment. On the website, founder Ryan Christensen says, “Sameunderneath’s mission is to change the way people look at each other.” 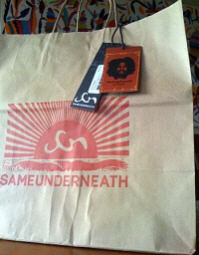 Over eight years ago, he started the Company by selling t-shirts, and now sells a sophisticated clothing line in Sameunderneath’s own stores as well as many other retail outlets. You can see from several years’ of press coverage, that Sameunderneath has been getting its “be kind to one another” message out pretty well.

But I was visiting one of Sameunderneath’s Portland stores to check out the style and quality of the clothing made from bamboo and cashmere. I love these fabrics–so soft!

Sameunderneath’s styles are fairly simple but different enough to be interesting.

Unlike Nau, which I noted has an innovative distribution strategy, Sameunderneath’s retail outlets and distribution appear to be relatively standard, although the Company has a history of using local manufacturers. And both Portland Sameunderneath stores are in highly walkable shopping areas, which may or may not be more green than being in a mall, but I certainly feel more green when I see more pedestrians than cars.