Green Gifts are Good Business Too

Last updated on by Leah Edwards

Having lived through the Dot-com boom in San Francisco, I went to many over-the-top networking events, at which I received too many (generally plastic) chotchkies. So I was pleased to see that when ThinkEquity Partners wanted to send partygoers off with a logoed-reminder at a reception during their ThinkGreen conference in San Francisco last week, they chose something useful and recyclable – wine. 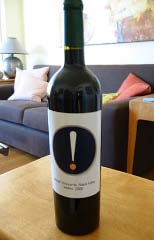 Organic vintner Jaeger brought a barrel of wine to the party where guests could decant their own bottle of wine, cork it and put on the label.

I was also impressed with a more extravagant corporate gift designed by Cari Class, the founder and principal of a firm called Design Source. Cari’s client, Mugnaini, which sells wood-burning ovens, wanted to send an impressive thank you gift to clients, and Cari designed a reusable wood box to hold kitchen accessories. Of the packaging, Cari says, “It was a gift in and of itself. The wood came from a sustainable forest in Canada, even the hinges were made from reused metal. The company’s emblem was branded on the front of the box. It is a lovely piece.” And it’s green too!